This ArtCar has DRIVEN between San Francisco and Texas five times and over the Rocky Mountains twice. Can your sculpture do that?

The Truck in Flux is also one of the few ArtCars that can drive on highway I-80 to get to Gerlach, and also be licensed to drive on the Playa. It’s been going to Burning Man since 1995 and is one of the last surviving ArtCars on the Dept. of Mutant Vehicle Historical ArtCar list.

It was my commuter vehicle in South Central LA and in East LA. It has driven hundreds of thousands of miles and gone through two engines, two transmissions, all the glass and several sets of tires.

The cohesiveness it has as a sculpture comes mostly from its venerability. It bears the marks and dents of its history with souvenirs literally screwed to it. Some of the decoration is comprised of parts of other ArtCars (Come Play w/Me, the Duke, RatGirl, the Grape, and others). It’s not just a rolling assemblage; it’s a rolling scrapbook – a rolling library.

The Truck in Flux used to be called the Horror Vacui Hacienda Mobile (my wife, an Art Historian & Museum Curator, coined this term). Horror Vacui means “fear of empty space” and is used to describe a busy aesthetic. It started as a Tiki Truck with bamboo trim.

This Truck was the first ArtCar to get a living garden – a tradition I continued with the Buick of Unconditional Love and Daisy Singer.

I bought this truck new in early 1990, and after six weeks of enjoying the new car smell I started sanding it down and drilling into it. Drove one of my neighbors crazy (like I was drilling into his car).

When you make an ArtCar you cross a line, you choose vision over resale value.

My previous three ArtCars were mechanical lemons – a Chevy Vega, a Ford Maverick, and a VW Bus. Not exactly CarTalk‘s top three. I bought a new truck because I was determined to start with something that was going to last, and it has. Those of you looking to make an ArtCar, hear me: Do NOT start with a beater – it’s akin to adopting a 12-year-old dog from the pound. You’re setting yourself up for heartbreak. I’ve lost three ArtCars and it’s no fun to see them die.

This is an important lesson, and one I forgot with my next ArtCar, the Buick of Unconditional Love . . . 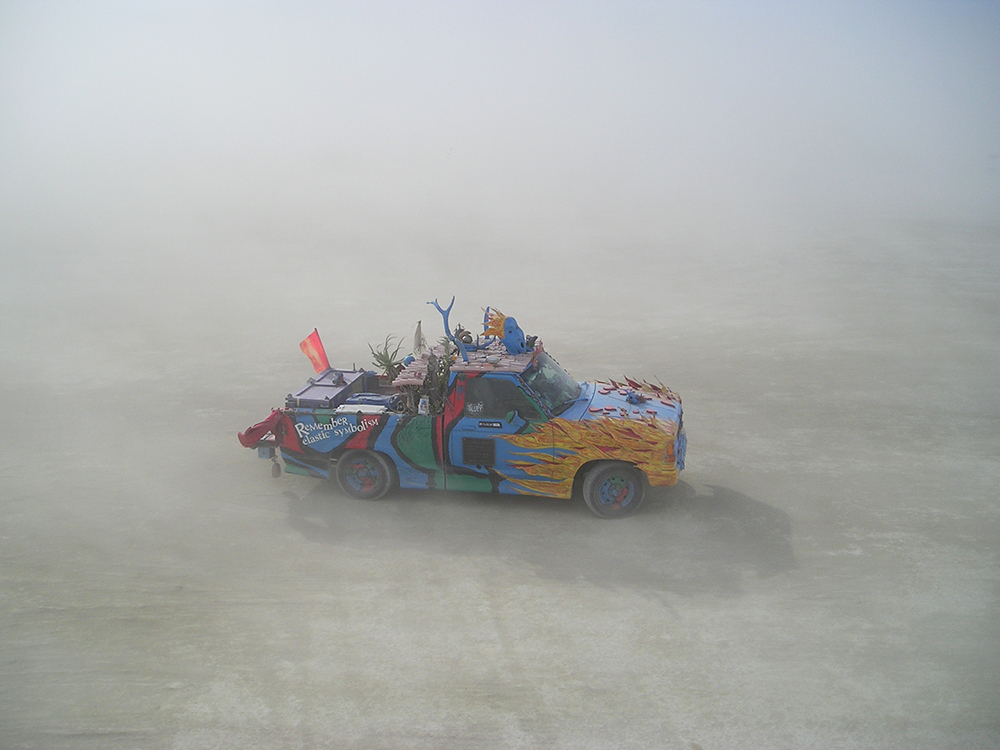 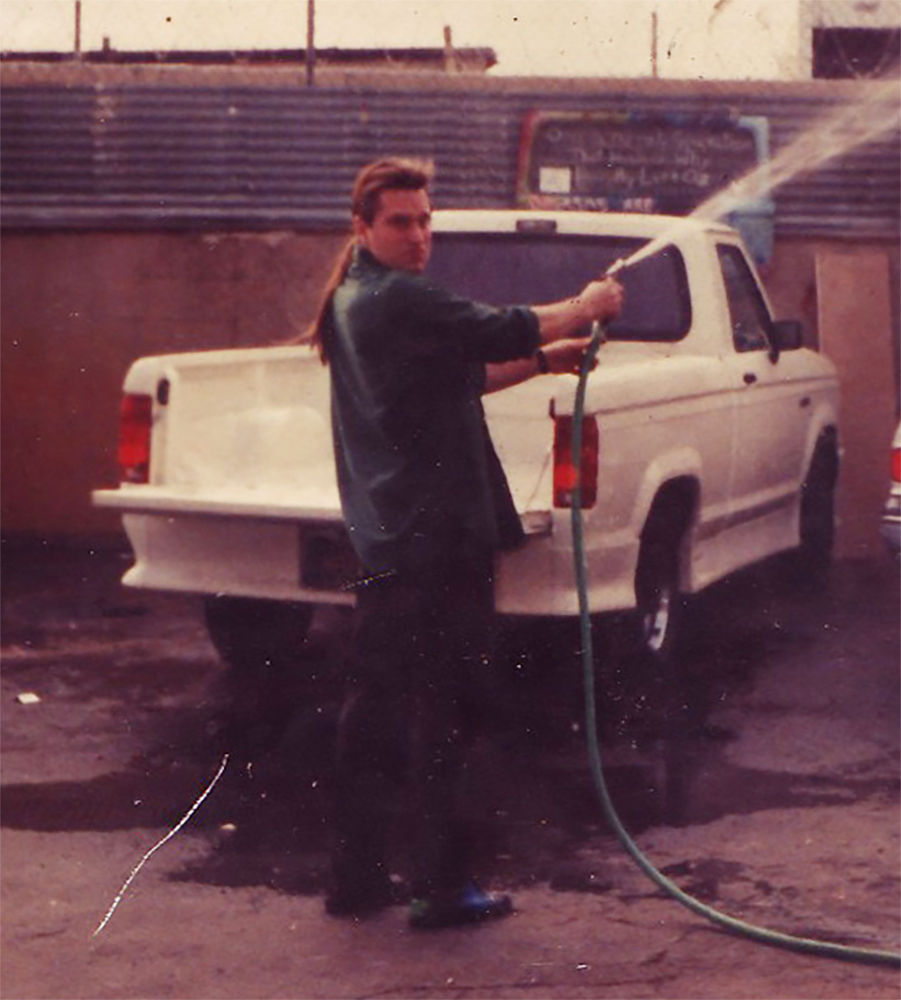 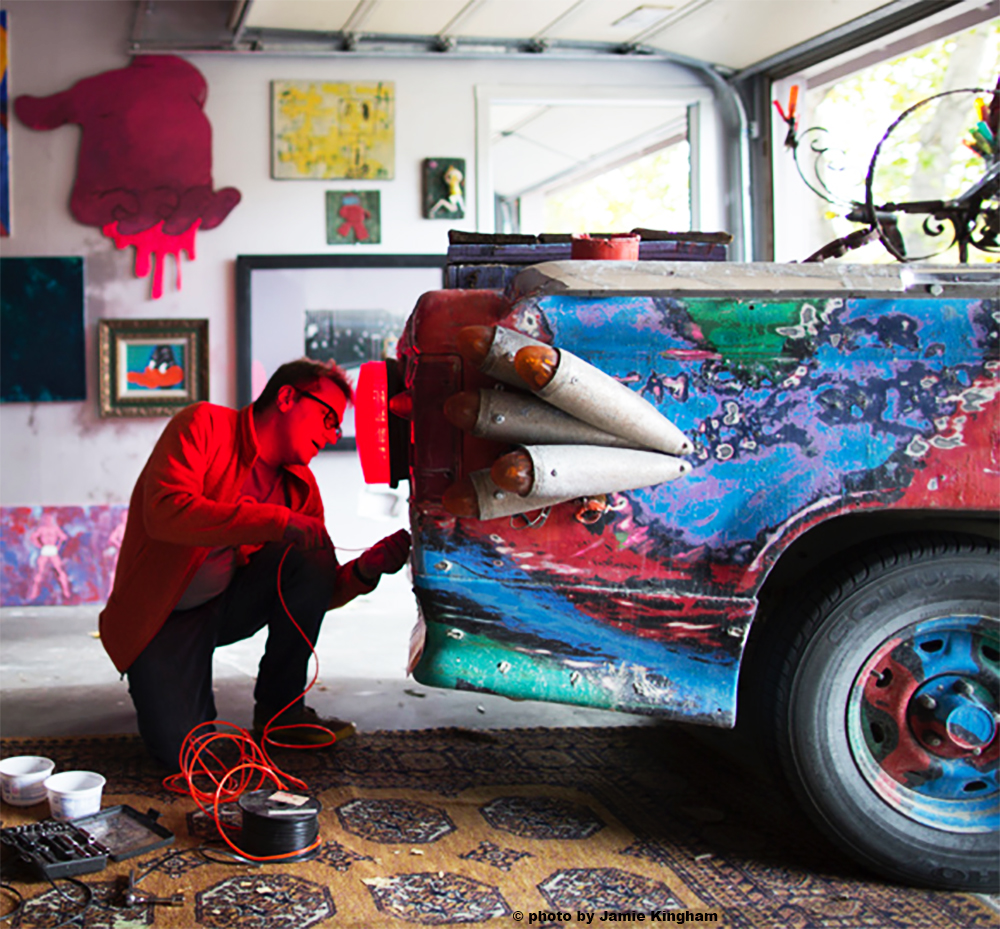 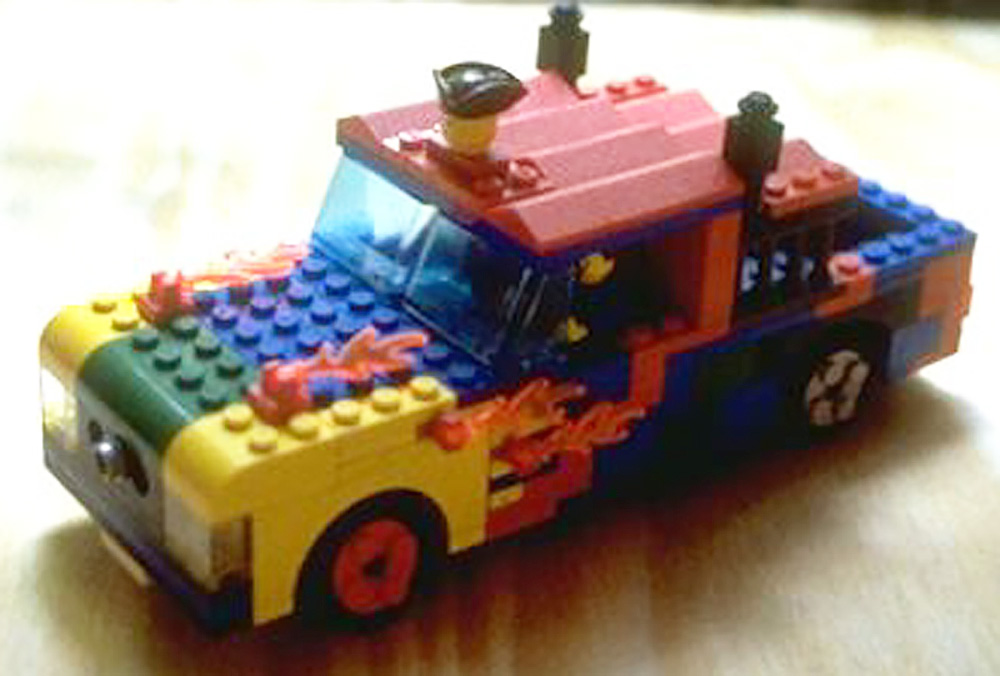 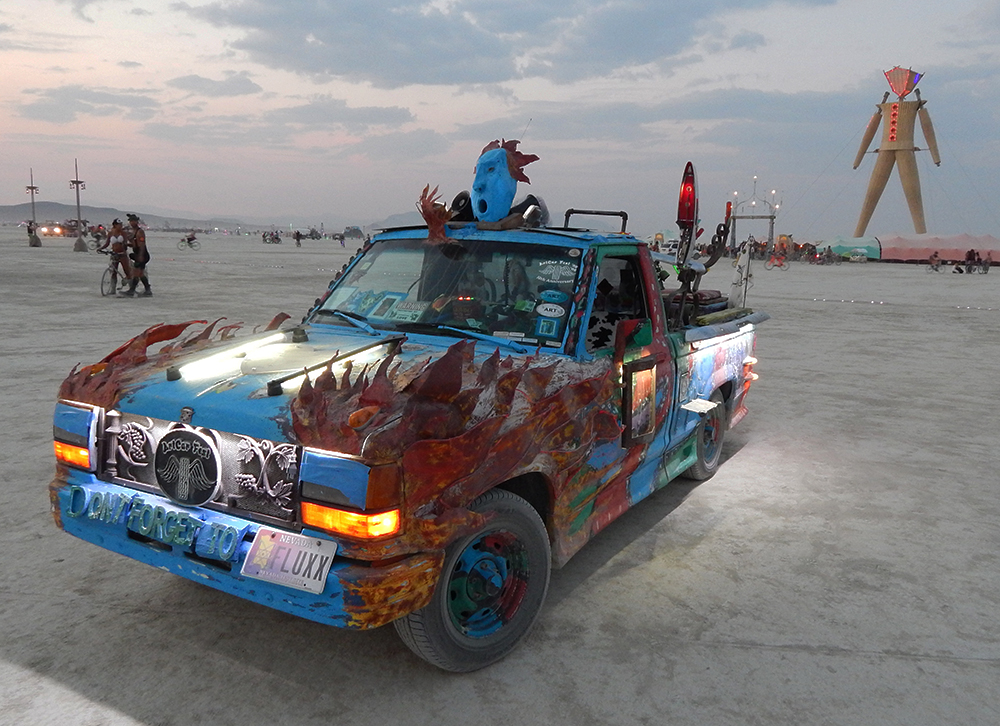 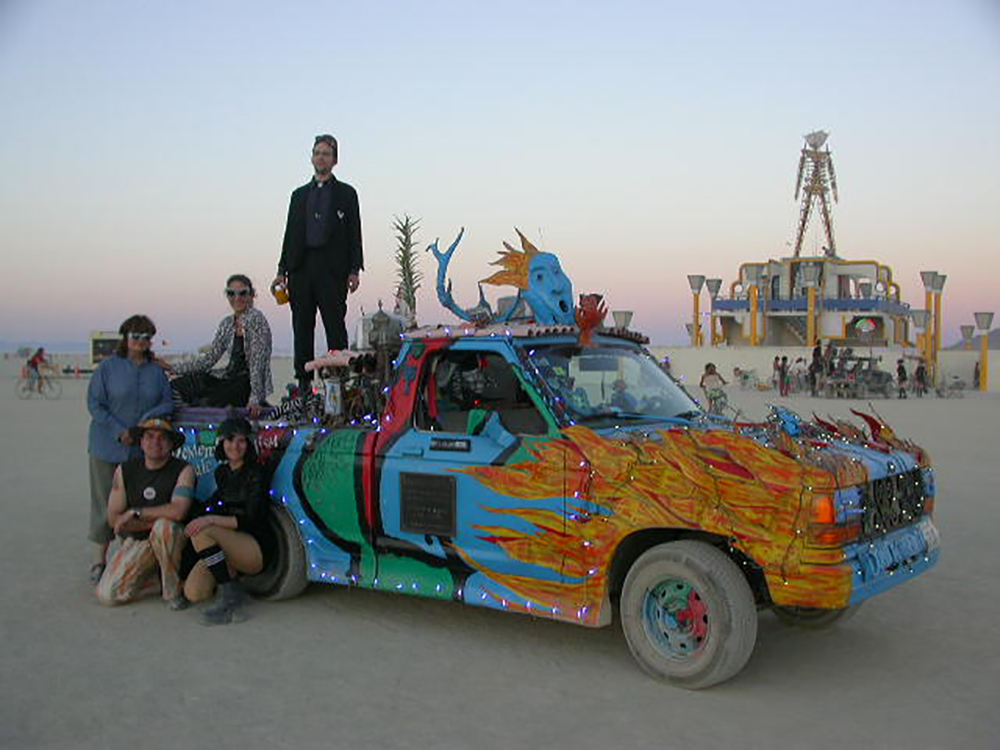 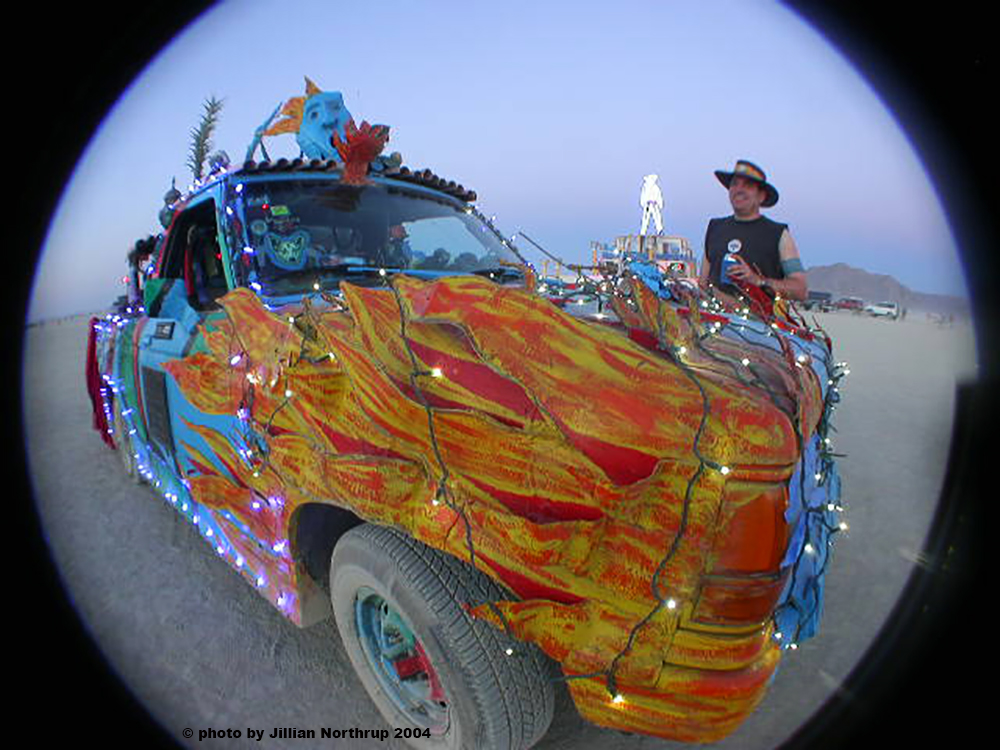 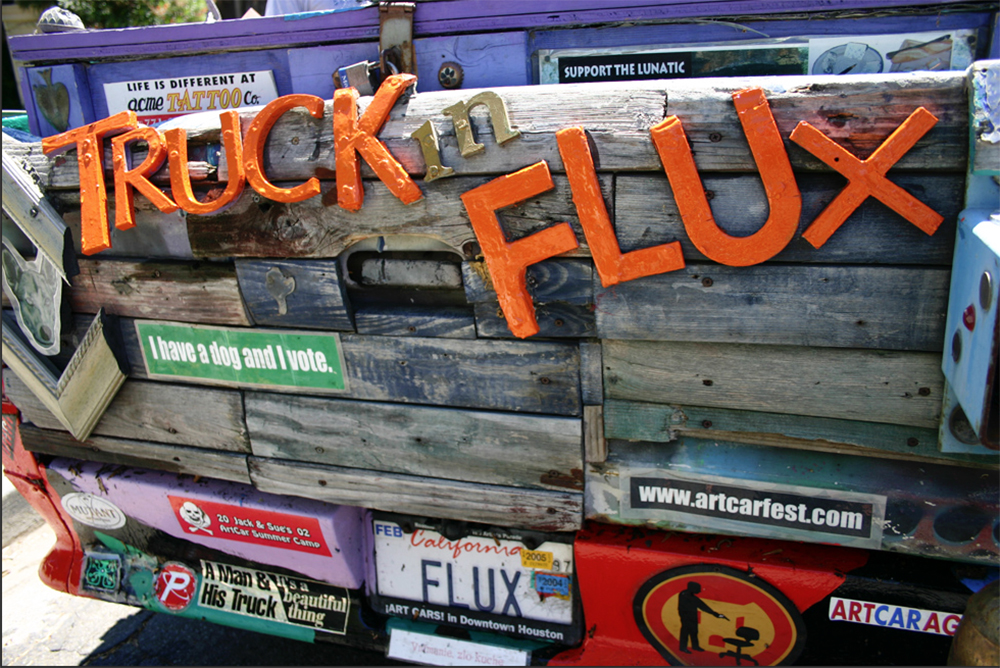 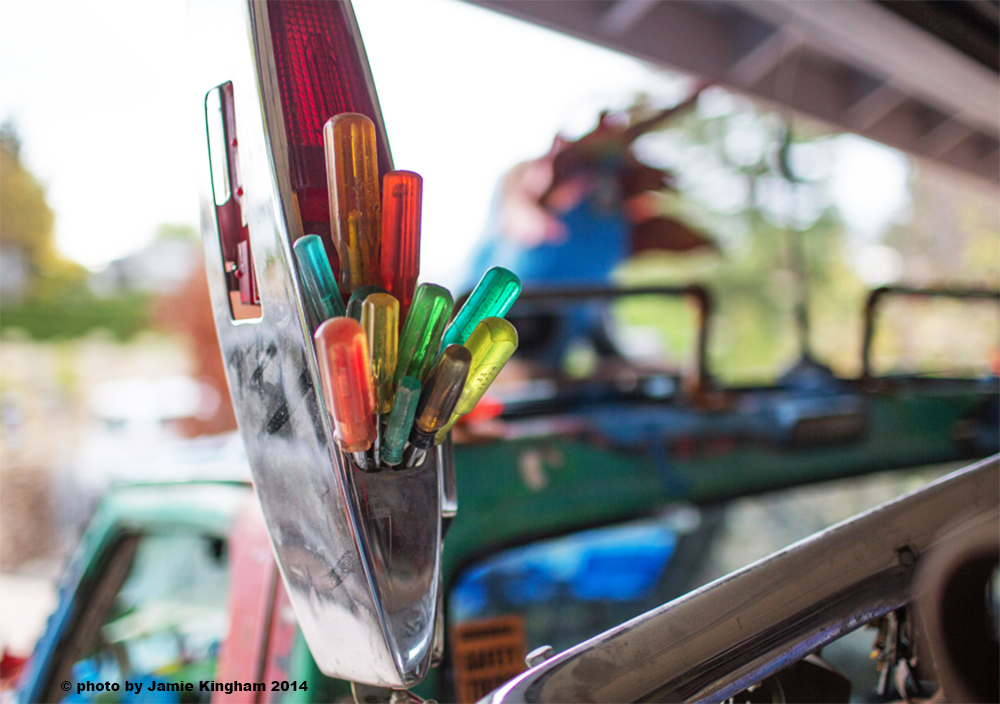 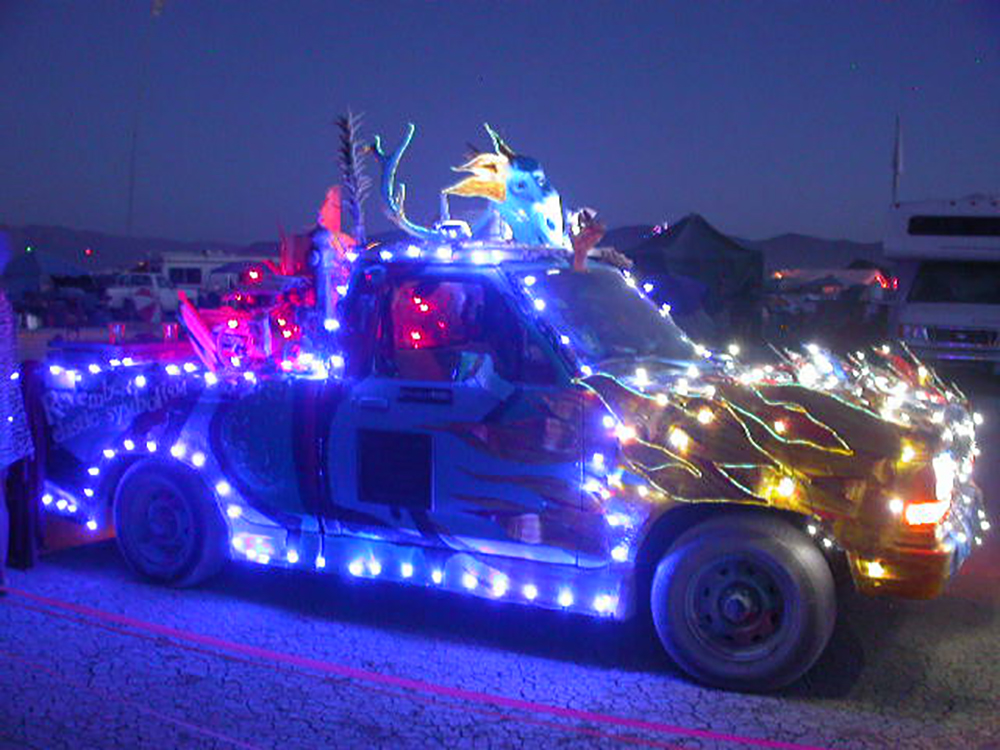 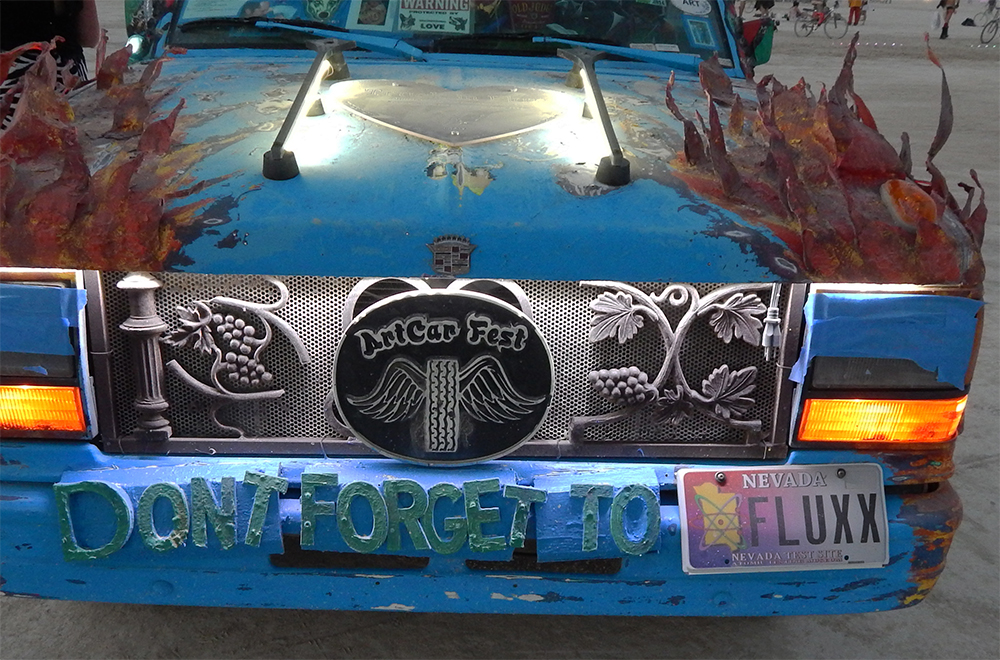 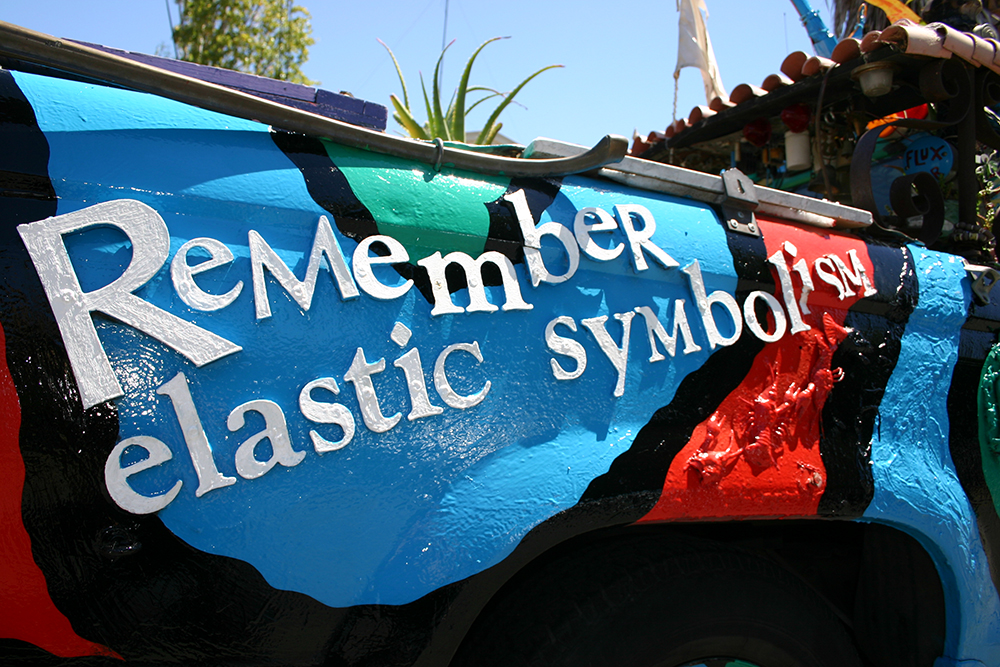 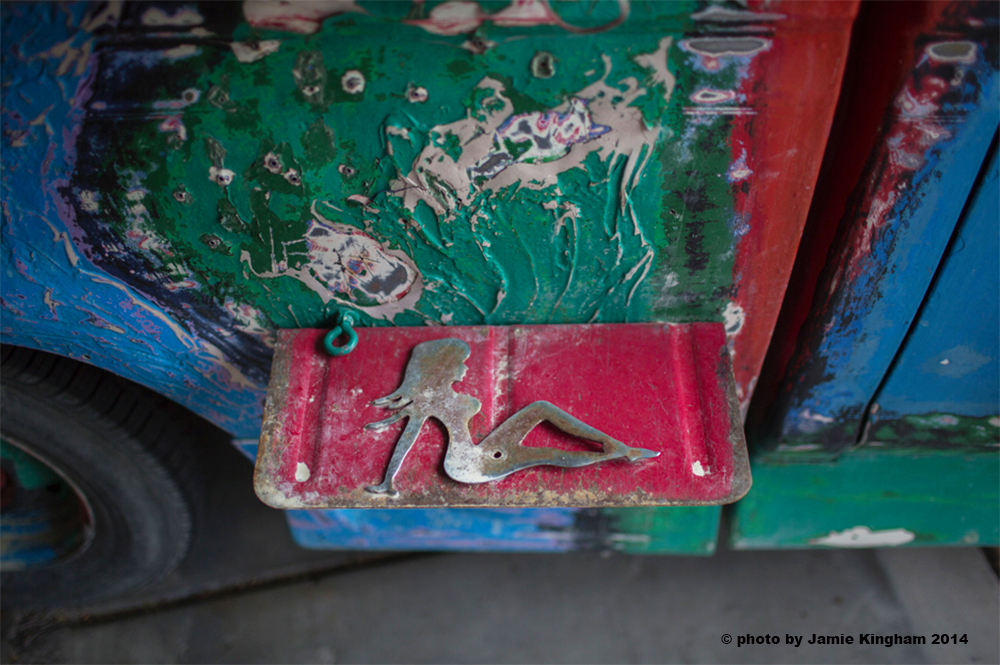 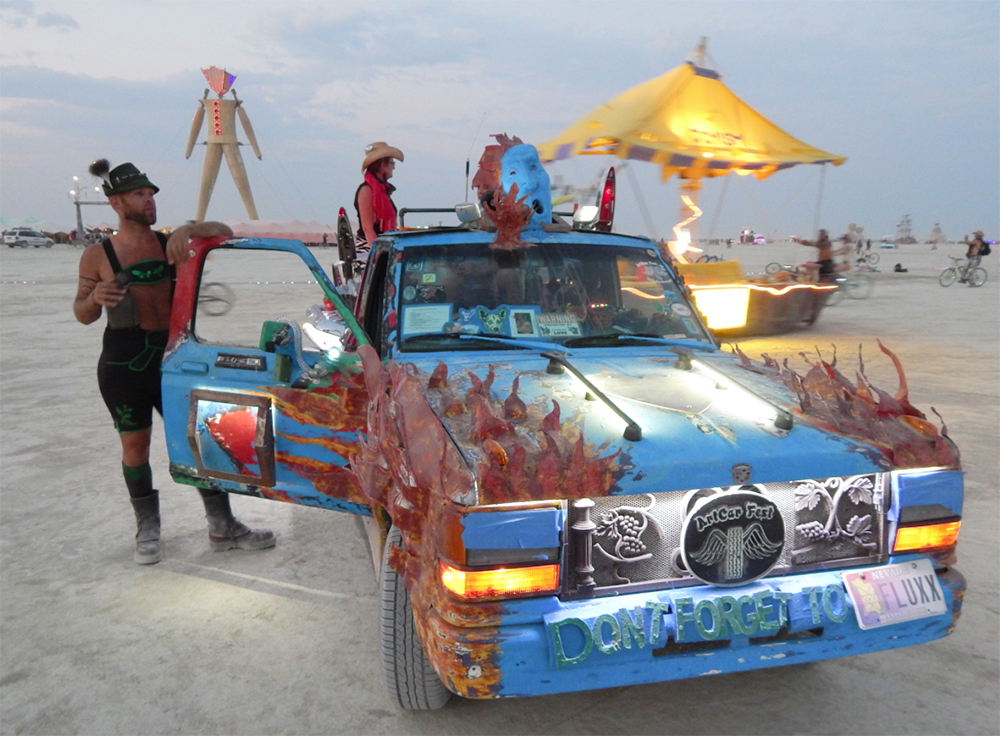 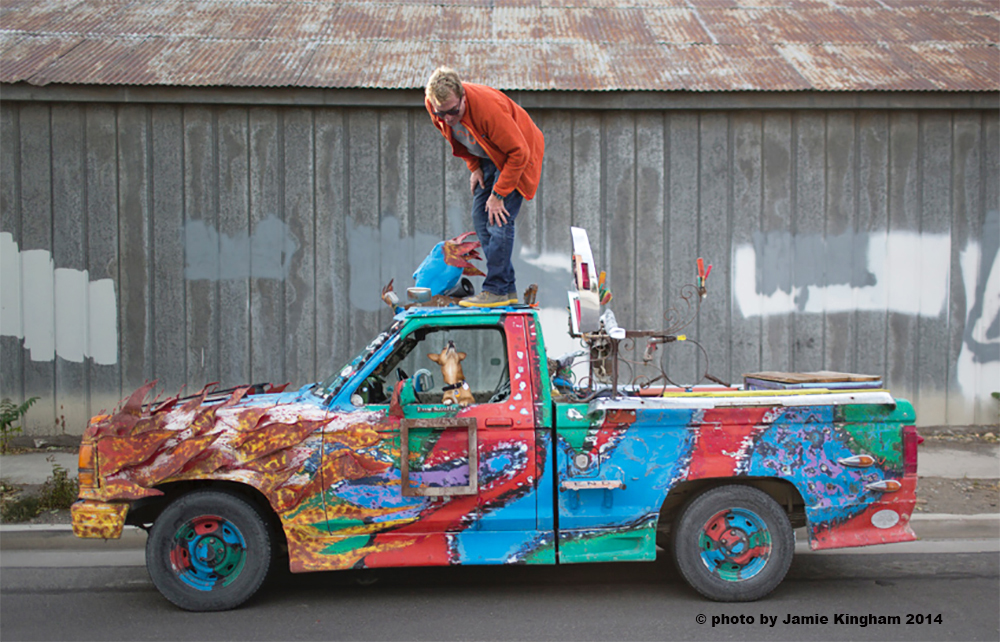 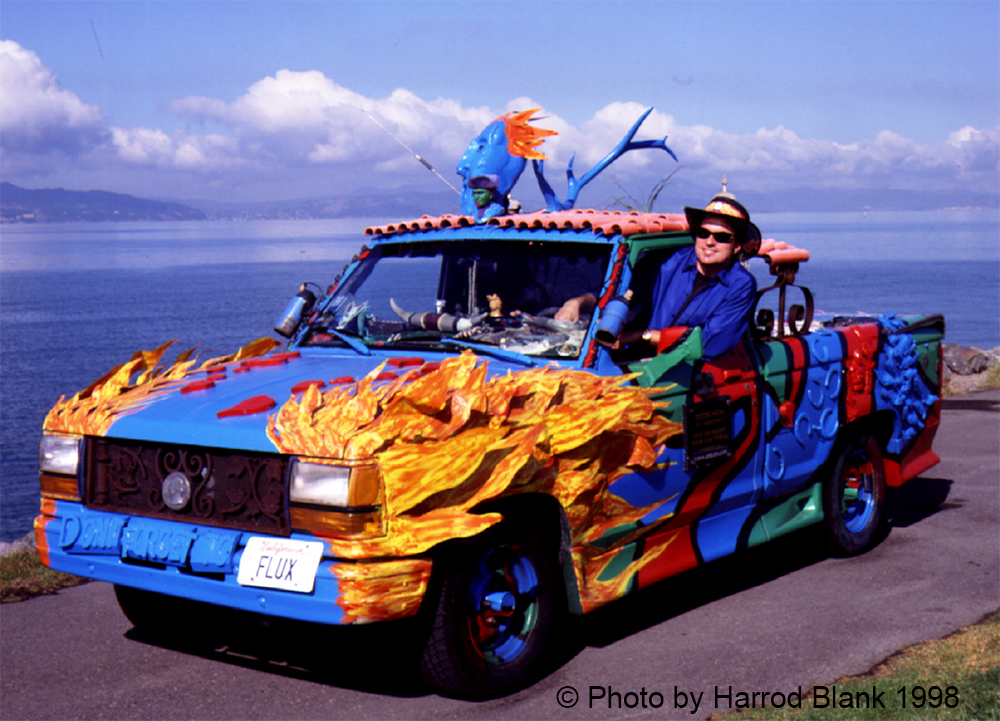 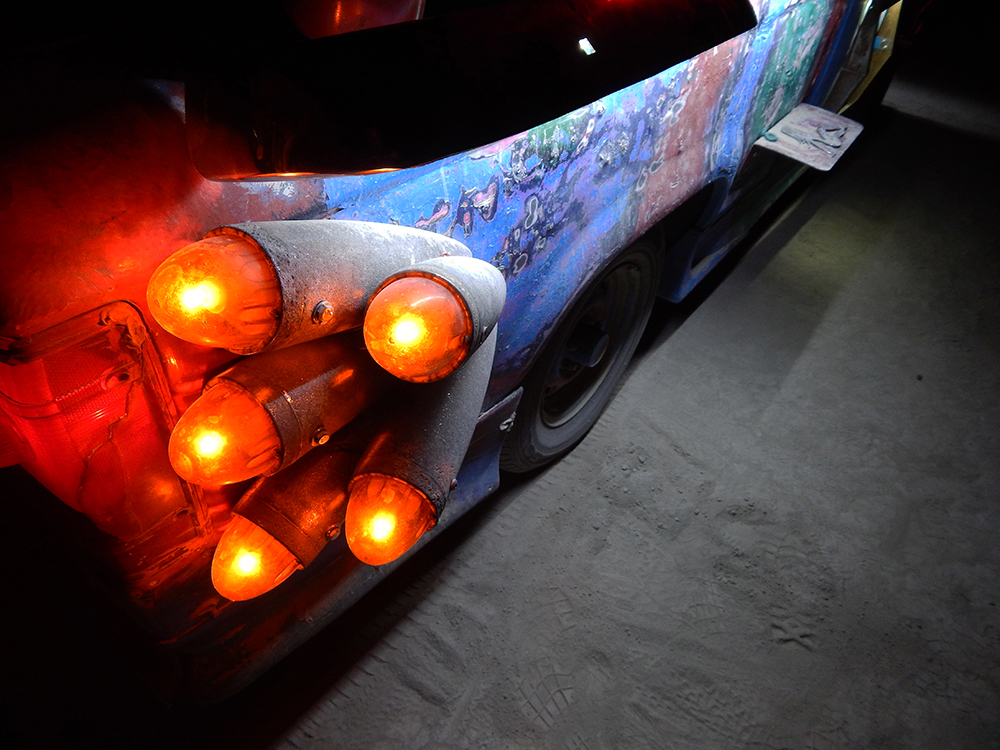 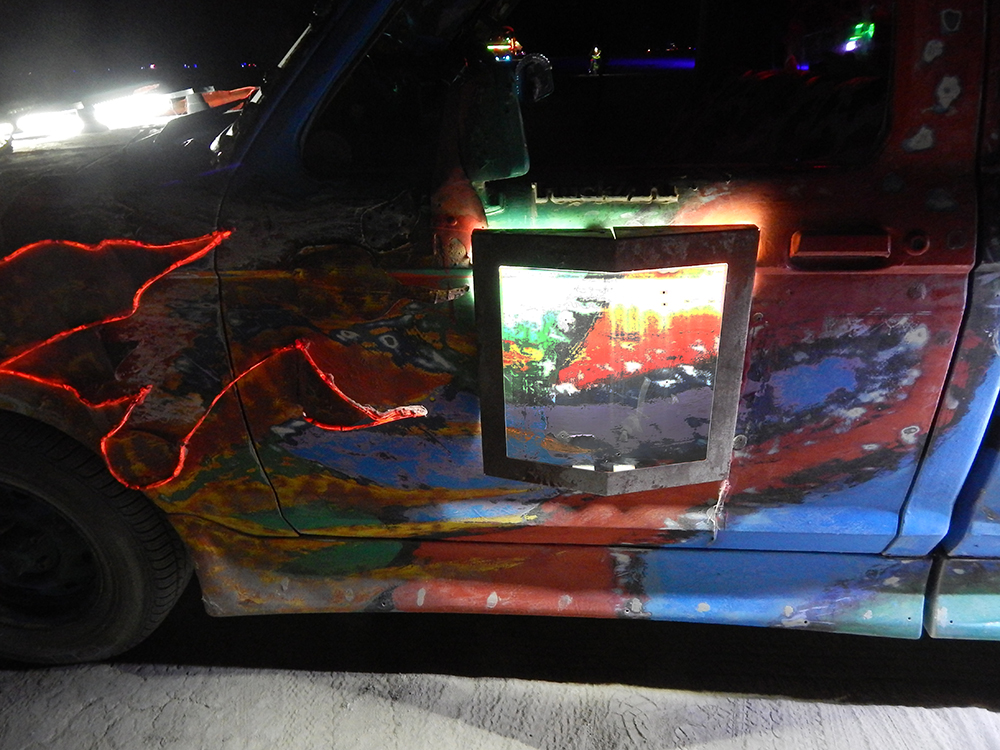 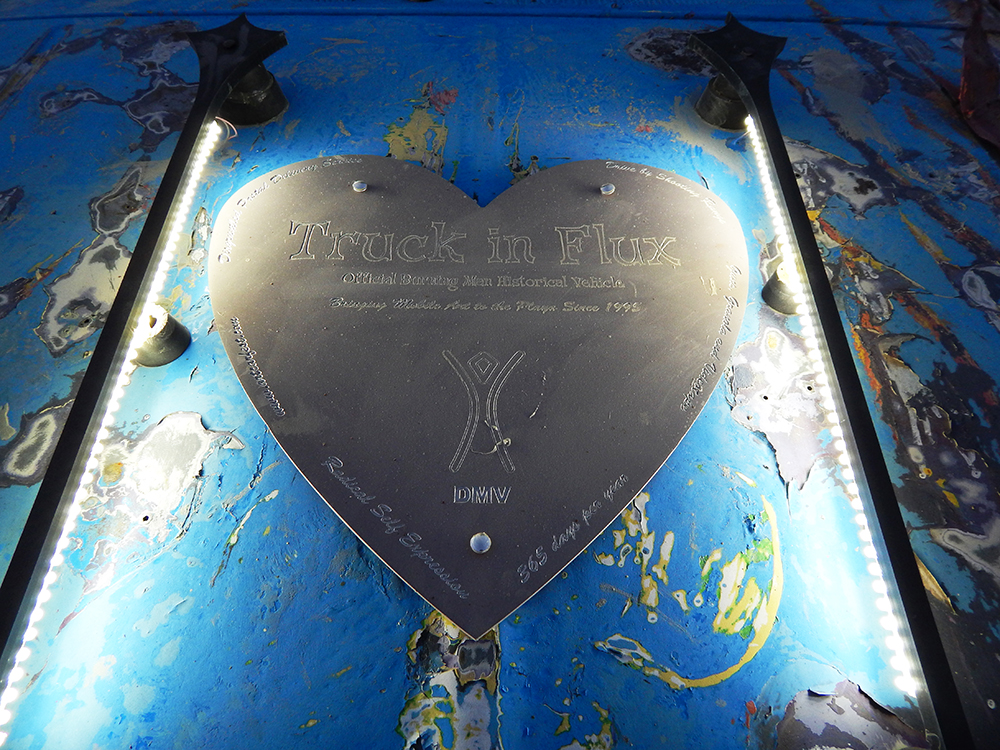 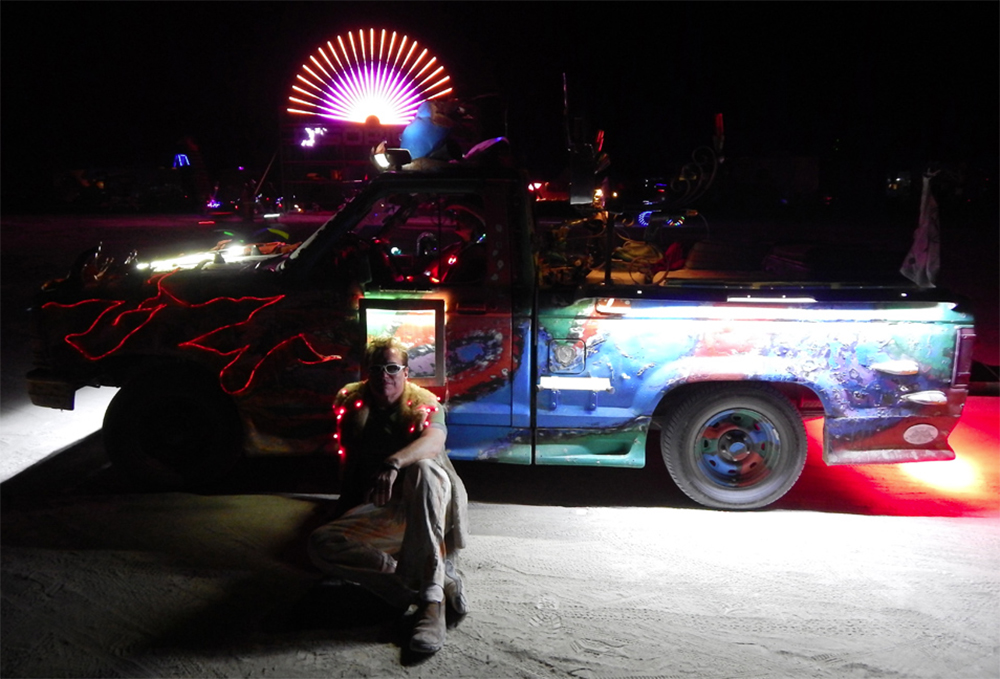 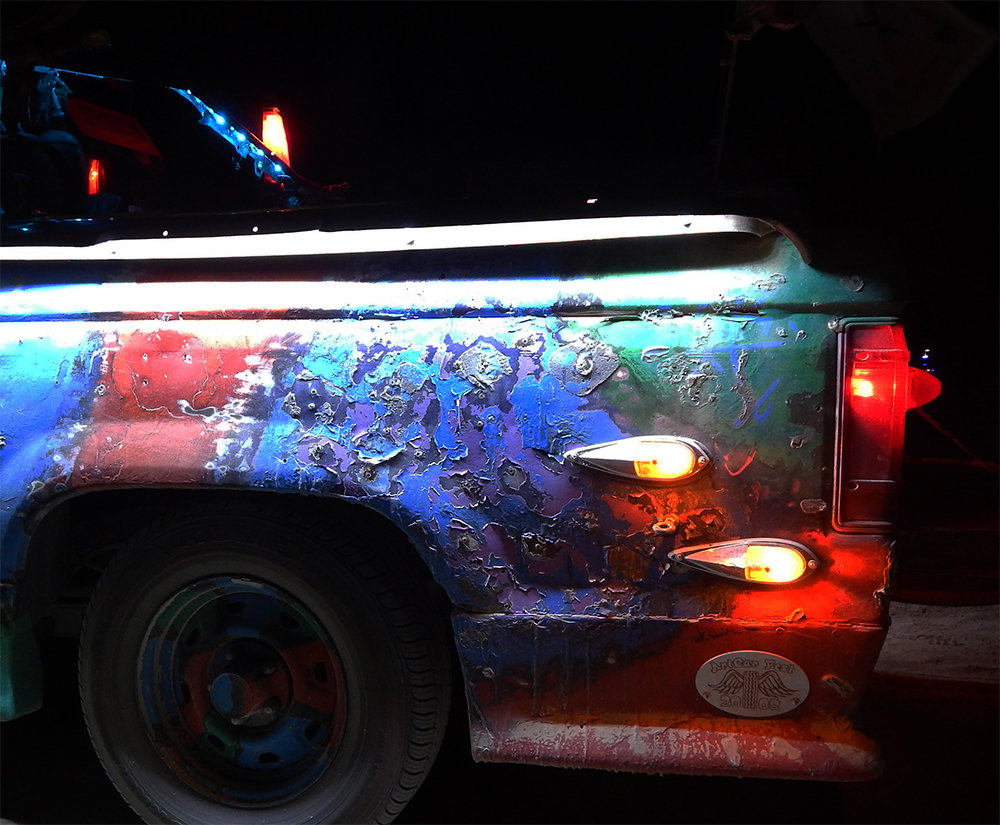 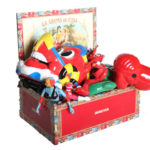 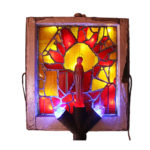 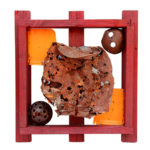 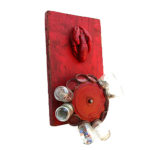 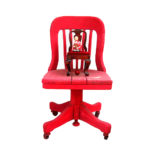 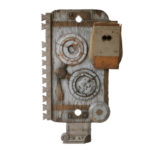